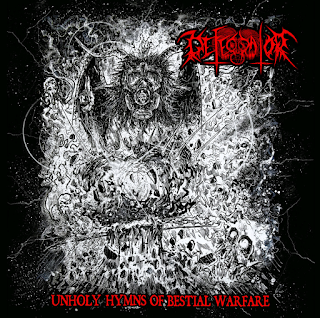 One of the more sweet and pleasant surprises of this gosh-darned pandemic was that Defecrator put out a new album. You might ask, 'Well golly gosh, how could that have happened after they broke up right around the time they put out their one great album 'Abortion of Humanity' in 2019 when one of them members moved to a different continent?!?"

And like most things, the answer would be: The Internet.

This Spring I saw a social media post from some bunny-lovin hesher that a new Defecrator album would be out and sure enough a few days later @goat_throne_records outta Texas had put out a new_ish cd/digital album by these local (and now not-so-local) metal giants.

If for some reason (like your own dumbass metalphobia) you are unfamiliar with all of the greatness that is/was Defecrator “Unholy Hymns of Bestial Warfare” is a really good place to get a grasp on what they had going on.

Now I'm just a dumb ol’ punk who worships at the altar I built at the corner of Crust & Grind, so I don't quite get all the metallic distinctions between black and death and black death and blackened grind and bestial and brutal and ska metal, so I am probably gonna do a bit of misgenreing for which I apologize in advance, but as Jesus said, 'I knows what I likes and this is it."

Cuz really Defecrator is just an absolute ripping band however you want to describe it. They play at and beyond super speeds while pounding the shit outta things along the way. Fast as fuck and heavy as hell with machine gun beats alternating with sledgehammer brain-thunkin. What has always made them stand out for me both as a once_upon_a_time live band and on all their recordings is the really excellent songwriting and all those delicious riffs. It's all brutal and intense and ridiculously fast as shit, but is anchored with brilliant hooks and an absolutely gripping tension in the songs.

There's layers upon layers of dynamic stuff happening in there and tons of great breakdowns thrown in that capture you. After a couple years, they really started to swing in the rhythms and use all three vocalists in a way that perfectly complemented one another. It's like high lonesome bluegrass gospel harmonies, but Satan. And as Satan mentioned in their memoirs, “If it ain’t got that swing (it does not mean a thing).”

In their several years of cursed existence, Defecrator grew into being a mighty powerhouse of a band that would both viscerally smack you in the face, and somehow grab you booty and make you want to shake it. Really fuckin phenomenal stuff. And those phenoms on full display on this new release which is a mix of pretty much all they did beyond the Abortion of Humanity album. In spite of being a collection of tracks from different moments, it holds together really well as a complete album. Probably cuz it was all mastered and shit.

Right in the middle, it's got my favorite thing they ever did: the massive Satanic Martyrdom 7" which has one of sickest (and swingingest) breakdowns I've ever heard that just pops up in the last minute of the track which is then followed by one of the fastest song openings you are ever gonna hear. And it works better here than having to flip a dumb record over. So yeah, if you don't have that Satanic Martyrdom 7inch just get this as it is one of the best local 7" records to ever come out and I think it's long sold-out. Those two songs would make this whole thing worthwhile.

But that's not clearly close to all that is here. It's got tracks from a couple of splits they did, so if your mom wouldn't let you buy the record they did with Goatpenis cuz of their name or cuz she was a little worried that Ritual Genocide was just a tad bit too specific about the targets on the whole genocide thing, this album will set you up. It's also got tracks from their 2015 demo on Transylavanian Tapes which will show you how they were a raw pummeling force from the beginning. If you get all fancy and buy the CD you even get a lil extra Impaled Nazarene crackerjack bonus which brings you up to close to an hour of a  magnificent metal maelstrom. Perhaps best of all, it kicks off with a cupola absolutely raging tracks that might have never been heard were it not for this showing up in 2021 thanks to Goat Throne.

Mount your throne on your goat and head to

You may also want to graze on over to Defecrator.bandcamp.com to hear the fine Abortion of Humanity album - digital only I believe cuz it sold out a while ago, but hot damn that’s one sweet (and swinging) album.

p.s: In case you weren’t paying attention, Defecrator is a splendid band name (or name for your next child)

Email ThisBlogThis!Share to TwitterShare to FacebookShare to Pinterest
Labels: review